Among the hot topics this year for the Braves has been Jeff Francoeur’s new batting stance.  Has it helped, hurt, or neither?  It’s still probably too early to say, but we can look at some lesser-known stats for an indication.  These numbers are through Tuesday’s game. 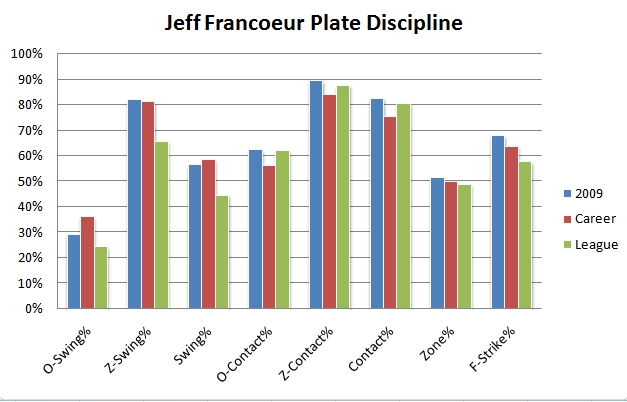 The “O” prefix represents pitches outside the strike zone, while “Z” is within the zone.  Zone% is the percentage of pitches he’s seen within the strike zone, and F-Strike% is his percentage of first-pitch strikes.Some of these stats confirm what we’ve believed for several years: Frenchy swings at more pitches than most batters, both inside and outside the strike zone.  This year, he’s cut down on the swings outside the zone but is still swinging at balls over the plate, which would partly explain why he’s still not taking any walks.  Jeff has caught up with the league average in contact this year, so we’ll see if he sustains that.

One thing you don’t see on the chart is that Jeff is batting .286 on balls in play, about 20 points below his career average.  If that starts trending toward his career norm, he may come closer to being a .300 hitter.  He’d be a .300 hitter who still doesn’t walk or hit for tremendous power, but I guess that’s better than hitting .200.